Today, 18th of May, the people of Thessalonika are voting on a popular referendum on the privatization of water. The referendum is being carried from below, against the authoritarian decision of the government stating that popular collective decisions are illegal. The law is illegitimate, the one no of the people opens up the many yeses to come. Así Sí!

One no, many yeses

Thessaloniki is a lively sprawling metropolis located in the north of Greece. As with the rest of the country, it is affected by increasing unemployment and poverty, a result of the government’s Troika-dictated policies, which have driven the economy into a deep recession.

In Greece, as in many other countries in the past, disaster capitalism has utilized the sovereign debt crisis -that it also helped produce- as an excuse to push forward an aggressive campaign of neoliberal plunder: Attack on the populations’ social, political and labour rights, dismantling of the health and education system, massive dispossession through mega-mining projects, and privatisation of everything that constitutes the public wealth. Again, as in many other cases, the government and the media are mindlessly repeating neoliberalism’s favourite mantra: «there is no alternative».

In this context, as part of the terms of the loathed «memorandum» imposed by the IMF, in 2011 the government announced its plans to privatize EYATH, the state-managed company providing the city’s 1.5 million inhabitants with water and sanitation services. Suez, the water sector giant, was quick to express interest in profitable EYATH. As of May 2014, the privatization process is underway, and two bidders, French Suez and Israeli Mekorot, have advanced to the second phase of the public tender. 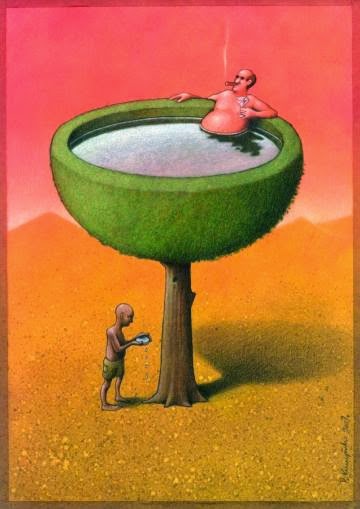 Despite the blackmail and propaganda, the citizens of Thessaloniki and their organizations have been opposing the government’s plan to sell off the company for three years now. They have managed to put the issue in the public agenda and provide concrete evidence on how privatisation of water services worldwide has invariably led to increases in tariffs, deterioration of the infrastructure, decrease in water quality, and the exclusion of great parts of the population from access to this vital common good.

Through their participation in the global and European movement for the defence of water, the Greek civil society organizations have found out how the model of privatisation that the government now tries to forcefully impose has failed in dozens of cities around the world, prompting the municipal authorities of a long list of cities to take back water management, in a worldwide shift towards remunicipalisation.

Indeed, the citizens of the EU are waking up to the fact that water management should be public, democratic and transparent. Nearly 2 million people in 28 countries have backed the European Citizens’ Initiative against water privatisation, Right 2 Water. The results of the ECI were presented to the European Parliament on 17 February 2014, forcing EMPs of all political persuasions to acknowledge that water privatisation is extremely unpopular in the EU, and obliging the European Commission to exclude it from the concessions directive.

With the tide turning away from privatisation worldwide, the Greek government remains isolated and has a very hard time convincing the citizens that “there is no alternative”. Indeed there are plenty of alternatives proposed regarding water management in Thessaloniki, all with a view to safeguard this vital good and ensure social justice and equal access.

Many citizens and organizations want to uphold state management, which has ensured reasonable tariffs to this day. Some others think that water management is more appropriately the task of municipal authorities. The Regional Union of Municipalities has already declared its interest in creating an inter-municipal water management authority. A third and innovative proposal comes from Initiative 136, a grassroots movement organising the citizens of Thessaloniki in local non-profit water cooperatives, which will unite to manage the water company under the principles of direct democracy, social justice, participation and accountability.

But in order to open the democratic dialogue on which is the most socially and environmentally responsible model of water management, the citizens of Thessaloniki have to face the common threat of privatisation. There is mounting social, political and legal pressure against selling off the company, and both local and national polls show that about 75% of the population opposes the measure. And with a Council of State (Greece’s supreme administrative court) decision pending regarding the constitutionality of the privatization, the process is now stalled, despite the best efforts of the neoliberal government.

In this political context, the numerous collectives and institutions that defend water as a common good and as a human right (SOSte To Nero, Initiative 136, EYATH Workers’ Union, Water Warriors, Open Assembly of Citizens for Water, and the Regional Union of Municipalities to name but a few) decided to step up the political pressure by organising a city-wide referendum regarding the privatisation of EYATH. The referendum is non-binding, as the Greek legal framework does not allow consulting the population on government policy unless it is ratified by presidential decree or an enhanced majority in the parliament. However, the organizers are certain it will make evident the overwhelming opposition of the population towards the privatization, and it will serve as a manifestation of popular will.

The date was set for 18 May 2014, at the same time as the first round of the municipal and regional elections, and a week before the European elections. It is a genuinely grassroots effort which is mobilising thousands of volunteers who will set up ballot boxes outside the electoral centres of Thessaloniki’s metropolitan area. Despite their limited funds and the hostile stance of corporate mass media, the campaigners have managed to cut through the despair, resignation and apathy brought about by 4 years of frontal attack on people’s lives. Feeling the warmth of international solidarity,the campaigners have informed and engaged Thessaloniki’s population, and they are now in a creative frenzy to ensure the organization of the referendum is efficient and transparent.

As economic governance gets more and more removed from the interests of the population that it claims to represent, the task now lies with the citizens to claim their basic rights, reinvent democracy and protect the common goods through popular initiatives. Greece, global capitalism’s latest experiment in accumulation by dispossession, foreshadows the bleak future that the corporate elites have in store for Europe’s population. But the Greek social movements and organisations do not intend to be passive observers to the corporate plunder. To the blunt repetition that “there is no alternative” they shout out that “there are plenty of alternatives” as long as the organised society unleashes its creativity and stands up for its rights and for its common goods.